A few weeks ago I posted about a cop in Muscle Shoals, Alabama who was fired for shooting a deer with his own personal rifle while out on patrol in his squad car.

WHNT TV reports that, yesterday, the Civil Service Board upheld the city’s dismissal of the officer.  In addition to being fired, Greg Scoggins also faces charges of hunting without permission, hunting with the aid of a motor vehicle, and reckless endangerment.

I posted about this relatively non-serious event for its local interest value, but it does offer some contrast to a national trend of letting cops off the hook for abuse of power and misbehavior that has much more serious ramifications.  Police routinely avoid consequences for bad behavior that would land ordinary citizens in the slammer.  The refusal of police to charge fellow officers (as well as prosecutors and other government officials) for offenses is called “professional courtesy” and can include everything from speeding to DUI to corruption to covering up much more serious crimes. 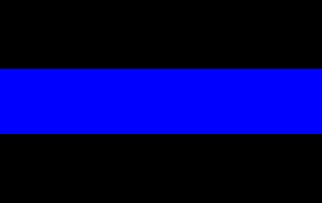 This “Thin Blue Line” sticker on a vehicle can serve as an identifier to law enforcement that the driver is among the class of people for who “professional courtesy” is extended.

Cops are held to a lower standard than the public when they should be held to a higher standard.  No one has a god-given right to their job, least of all a public servant and any cop who thinks he is above the law doesn’t deserve to be a cop.  While he certainly has the right to challenge the criminal charges against him, the bottom line is that he should be subject to exactly the same treatment as any ordinary citizen who commits the same act, whether it be speeding, illegal hunting, driving under the influence, or violating someone’s rights.

So far, it seems that the city of Muscle Shoals is holding this officer accountable.  Hopefully this is the rule rather than the exception.