My daughter, a California public defender, sent me this link from the New York Post.  I include the entire text of her message below:

While the actual timeline is being disputed by the NYPD, the basic facts of the story are that the kid was accused of stealing $5 from another kid.  After receiving a 911 call alleging assault and robbery, the police came to the kid’s school, handcuffed him, and held him there for several hours.  They then took him to the police department for questioning where they held him for another several hours, eventually charging him with robbery. 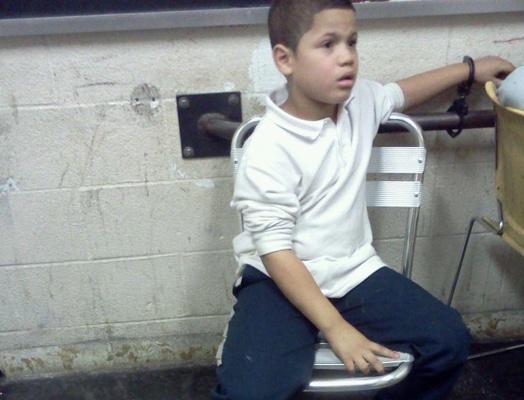 Luckily the kid’s mom snapped a picture.  When cops are involved in any abuse of power, the rule is that if you don’t have pictures, it never happened.  Hell, even if there are pictures, cops still often tell a story that is at odds with the visual evidence.

Of course, this kind of child abuse happens because there are no consequences to those involved.  Even if the family wins its $250 million lawsuit against NY and the NYPD, its the taxpayers who will ultimately foot the bill.

Oh.  One more thing.  The kid was innocent. The charges were dropped when another kid admitted to the theft.