Despite all the doomsday hype coming out of our warmongering political class, here is what sequestration will do to defense spending.

From Wikipedia (referencing the CBO)

The spending sequester in the Budget Control Act of 2011 (BCA) essentially freezes defense spending in current dollar terms for the 2013-2021 period, limiting growth to approximately 1.5% per year (about the rate of the Consumer Price Index) versus approximately 8% per year over the past decade. CBO estimated defense spending under the sequester (excluding war spending called “overseas contingency operations”) from 2012 to 2021 would be $5.8 trillion, versus $6.3 trillion estimated prior to passage of the BCA, an avoidance of about $500 billion in additional spending over a decade. Spending would decline from $562 billion in 2012 to $538 billion in 2013, then slowly rise to $637 billion by 2021.[2]

Here is what reason.com has to say:

Nevertheless, even if these sequesters do kick in, the feds will spend more in 2013 than they spent in 2012. That’s because the sequesters are not cuts to spending; rather, they are reductions in planned increases in spending. The reductions amount to about two cents for every planned dollar of increased spending for every federal department.

What you need to remember when assessing the reports in the establishment media is that sequestration, while hardly constituting even a minor dent in defense capacity, is income that the military industrial complex won’t be seeing and that is the reason for the fear mongering.   Exemptions steer many of the cuts away from most of the really politically sensitive spending (military pay, health care, retirement, and most benefits).  But, not a single defense program is  eliminated by sequestration, but the air force and navy will be buying fewer airplanes and conducting fewer costly operations.

Just to put things in proper perspective, the U.S. military spending isn’t exactly suffering.  We could actually cut spending in half and still be spending more than all of our so-called potential enemies combined. 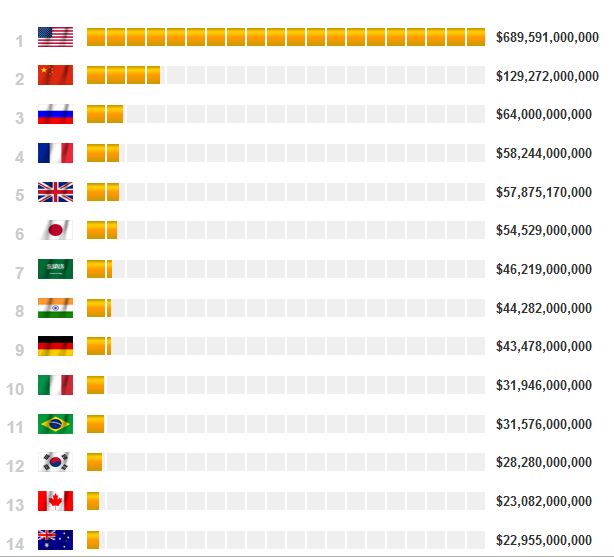 Of course, since war spending is exempt from sequestration, we should all brace for more war as a path around the required cuts.  I doubt the public will even notice.