El Monte police Capt. Dan Buehler said the officers had an appointment to meet with Luu and Nguyen about 3:30 p.m., but were delayed and ended up arriving about 4:30 p.m.

“They looked for any signs of dogs — chew toys, dog mess, what have you,” Buehler said, adding that they entered the yard after not seeing anything indicating a dog was present.

“They walked up to the porch. They rang the doorbell. They knocked on the door. That’s when the first dog came around the house,” he said.

Now watch the video of the cops entering the yard. 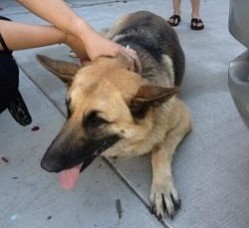 So, if the cops are lying about their entrance unto the property, why would anyone believe their story about why they shot the beautiful 2 year old German shepherd named Kiki whose only crime was being in her own fenced in yard marked behind a gate with a huge sign (impossible to miss) that clearly indicated there was a dog there?

The picture to the left is Kiki after being shot.  She was taken to the vet, but had to be euthanized.

The story the officers tell differs from the home owner’s account in other ways, too.

Luu said she asked the officer why she shot the dog, and why they officers simply entered the yard without calling on the phone.

Luu said the officer responded that she did not see the “beware of dog” signs, and that she did try to reach the family by phone, though Luu said she received no such phone call.

Luu said she told the officers that her dog, which was lying wounded in the backyard and vomiting blood, needed medical attention. An officer responded that the dog was okay.

Before the animal was treated, officers demanded to see license documents not only for the wounded dog, but for the family’s other dogs, Nguyen’s sister Anna Nguyen said.