I just finished watching the 2012 movie called Compliance.  It’s based on an incident at a Kentucky fast food restaurant where the assistant store manager received a call from someone posing as a police officer.  The caller then talked the assistant manager into holding and strip searching another employee under the pretext under the pretext of a theft investigation.  By the time the incident ended hours later, the female employee had been, not only thoroughly humiliated, but  sexually assaulted by the assistant manager’s fiancé. 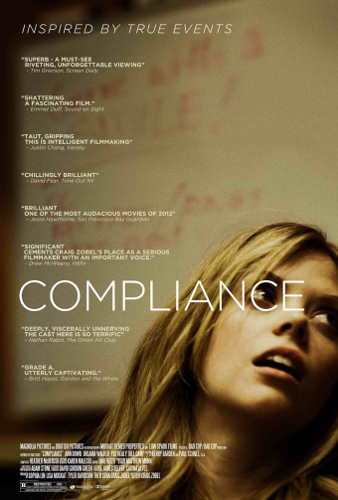 To me, the name of the movie as well as the story itself deliver a single message.  Our culture, education, and statist political environment impart an attitude of near total subservience to authority, especially police authority.  Most people just assume cops know what they’re doing, abide by the law, and are there to help us.  That’s why websites like The Agitator, PINAC, and Cop Block which expose the utter fallacy of such beliefs are so important.

The movie, Compliance, is remarkably true to the actual events in Kentucky, but as the movie points out, the Kentucky incident was the culmination of a series of more than seventy similar events across thirty states over more than a decade.   The man they finally charged for the crimes was employed by a private security firm, Corrections Corporation of America, but was an avid consumer of police magazines and had filled out applications for numerous law enforcement jobs.  While the incidents ceased after his arrest, Stewart was acquitted of the charges in 2006.

It’s a chilling movie and I found it uncomfortable to watch.  What disturbed me the most was wondering how I would respond if faced with a similar situation.  After the fact it’s easy to say I would have seen right through it or at least questioned it.  After years of reading The Agitator and becoming highly skeptical of law enforcement in general, I doubt that I would have fallen for it, but back when I was 30 or 40, I’m not so sure…