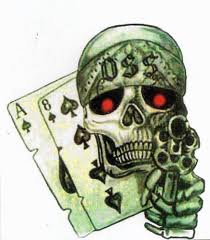 The L.A. County Sherriff’s Department has moved to fire seven deputies for being members of a secret “law enforcement clique”.  Apparently that’s what they call gangs when they exist  inside a police organization.   The gang adopted the name Jump Out Boys.

The secret gang was uncovered back in April 2012 when when a pamphlet was discovered that encouraged aggressive tactics and glorified officer involved shootings.  The seven officers, ironically part of an elite gang enforcement team, have been on leave since last May.

The Sheriff’s Department has a long history of secret cliques with membership in the groups having reached the highest ranks of the department. In recent years, sheriff’s officials have sought to crack down on the groups, fearing that they tarnished the department’s image and encouraged unethical conduct.

To paraphrase, “we don’t really give a shit about the people they victimized, but they are bringing unwanted press attention, so we had to do something or at least make it look like we were doing something”.

In the case of the Jump Out Boys, sheriff’s investigators did not uncover any criminal behavior. But sources said the group clashed with the department policies.

Why am I not surprised that the Sheriff’s internal investigation didn’t uncover any actual crime?

An April 2012 LA Times article outlines a history saturated with this kind of thug club behavior:

Other cliques — with names like Grim Reapers, Little Devils, Regulators and Vikings —- have been accused of breeding a gang-like mentality in which deputies falsify police reports, perjure themselves and cover up misconduct.

What a bunch of sweethearts, huh?

Historically, within the Sheriff’s Department, the groups have been tied to patrol stations. In one instance, a federal judge called one of those groups, the Lynwood Vikings, a “neo-Nazi, white supremacist gang” that had engaged in racially motivated hostility. As part of a 1996 settlement, the county agreed to retrain deputies to prevent such conduct and pay $7.5 million to compensate victims of alleged abuses.

Affiliation with such groups reaches the highest levels of the department, all the way up to Baca’s second-in-command, Paul Tanaka, who the sheriff acknowledged in an interview last year still had his Vikings tattoo.

Through all three articles, there is practically zero detail on the behavior of the deputies other than to clear them of any illegal conduct.  As with most internal police investigations, the public will never know how thorough the investigation was or what was actually discovered.  Such is the nature of the blue wall of silence.