Reason.com reports on a Pew research poll about the partisan shift in attitudes regarding the NSA surveillance issue.  Isn’t it amazing how stuff democrats didn’t approve of when Bush was doing it is suddenly okay when their guy is doing it?  The reverse is, of course, true as well.  When Bush hugely expanded Medicare with the prescription drug program, republicans turned right around and reelected him. 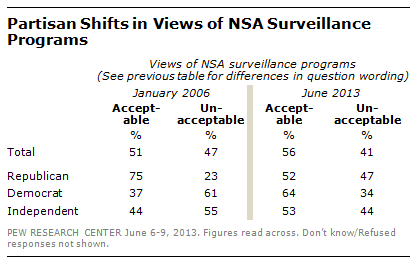 This mindless party loyalty defines the shallow nature of the majority of the American populace when it comes to politics.  While, establishing principles and informing one’s self about actual issues is difficult, simply subscribing to the views of one of the two major league teams is pretty simple.  It is that simplistic approach that permits both parties to be nearly identical while still eliciting near maniacal worship from their members.