The U.S. considers sanctions against Pakistan over a $7B “peace pipeline” deal with Iran.  Such a deal threatens U.S. efforts to bring Iran to its knees for failing to prove that it is not manufacturing nuclear WMDs in a repeat of the same strategy used to start a war with Iraq.

Secretary of State John Kerry says the U.S. will not accept North Korea as a nuclear state.  Wait a sec.  Aren’t they already a nuclear state?  Surely the recent U.S. strategy of flying strategic war planes around over the peninsula will calm things down.

A Saudi Arabian court has sentenced a man who stabbed his best friend ten years ago, paralyzing him, to be paralyzed himself if he can’t come up with $266,000 in compensation for his victim.

What happens to persecutors who abuse their trust and destroy people’s lives?  Nothing.

From reason.com:  A Texas state trooper charged with sexually assaulting two women during a traffic stop was providing them with “customer service,” says Dale Roberts, the executive director of the Columbia Police Officers Association (CPOA) and a professor at the University of Missouri. (The CPOA is a part of the Fraternal Order of Police, one of the country’s largest police unions.)

Berkeley city councilman, Gordon Wozniak suggested a tiny tax on email in a debate on how to save their historic Allston Way post office.  And George Skelton at the L.A. Times thinks it’s an excellent idea.  He doesn’t see it as a way to save the post office so much as a way to cut down on spam.  Although, he ponders how such a tax might be used to bring happiness to people (just as all our other taxes do so well):

Or just to help replace the tax revenue lost by technology putting people out of work. That was the idea of the Canadian economist — Wozniak’s inspiration — who first raised the notion of a bit tax back in 1997 in a speech at Harvard Law School.

Yeah, just what we need is another welfare program for all the poor souls who are suffering from new technology.   By that logic, we would all be much better off if we still lived in caves.

When a cop brings a drug dog to your front door, he is conducting a search, so he better have a warrant before he does it.  So says the Supreme Court in a judgement in the case of Florida v. Jardines handed down this morning.  The fact that it was a 5 to 4 decision illustrates how tenuous your few remaining rights actually are. For more background read This Dog Can Send You to Jail.

Bitcoin is going to open an ATM in Cyrpus.  Bitcoin is a decentralized digital currency that, unlike government operated central banks, increases supply only under rigid automated rules.

The Tennessee legislature is considering a bill that would abolish the power of police to seize property without ever charging the property owner with a crime, a practice universally referred to as theft if conducted by any other entity.

Every month, 14 million people now get a disability check from the government. In Hale County, Alabama, 1 in 4 working-age adults is on disability.

A Tunisian preacher has called for a 19-year old girl who posted her topless pictures on Facebook to be “quarantined” and stoned to death before she starts “an epidemic.”  She also had the words, “My body belongs to me” written across her chest.

Only a cop could crash into a dirt bike with a squad car from behind (twice!) and then blame it on the biker, charging him with reckless endangerment.  I bet cops hate it when video, showing their blatant abuses, winds up on the internet.   The name of the biker is, of course, public, while the name of the cop is protected.

Last month, when LAPD was conducting a manhunt for ex-cop, Christopher Dorner, they let loose a barrage of bullets on a pickup truck similar to the one Dorner was driving.  Unfortunately, there were only two women in the truck delivering newspapers.  The two women survived the shooting, but their truck was riddled with over a hundred bullet holes.

LAPD offered to replace the truck, but the women rejected the offer when it turned out they would have to pay income tax on the truck (valued at $32,560) as if it were a gift.  And, to top it off, according to Glen Jonas, the attorney for the women, the LAPD and the Ford dealer wanted the women to pose with the new truck for a photo op.

Then there’s this little comment that will almost certainly make you blow coffee out your nose:

“It’s really sad for us because we want to help these women move on with their lives, and help them move forward with that, we just can’t get past the 1099 issue,” LAPD Cmdr. Andrew Smith said.

Those poor cops.  It’s always all about them.

After the shooting, Jonas said he was shocked by the officers’ actions. He said neither the size of the women nor the blue Toyota Tundra truck they were in matched the description of Dorner’s Nissan Titan.

Eight officers were involved in the shooting. They were assigned to non-field assignments “until the (police) chief decides otherwise.”

Typical strategy for these kinds of events is for the cops to string out the “investigation” until the public outrage dissipates and then quietly clear the officers of any wrong-doing.

As I wrote a few days ago, not all the bullets went into the truck.  They apparently sprayed the entire neighborhood with lead.

There are only people with a great capacity to rationalize. 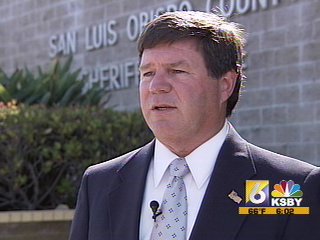 This is certainly the case with the state and federal officials who joined together to crucify Charles C. Lynch, who meticulously followed state law and set up a medical marijuana dispensary in Morro Bay, California in 2006.   And no one was more enthusiastic in that crusade to destroy Lynch  than San Luis Obispo County Sheriff Pat Hedges (pictured at left).

While Lynch had the blessing of the city and repeatedly solicited guidance from the DEA on the federal ramifications of operating a dispensary under California state law,  he was still targeted by Sheriff Hedges.  Lynch was never charged under state law and Morro Bay police did not participate in the 2007 raid that started the train of events that would ultimately leave Lynch bankrupt.  But, the DEA was a willing partner in the sheriff’s campaign of against Lynch.

I just finished watching “The Lynching of Charlie Lynch” available in disc or streaming video from Netflix.  This documentary tells the story of a man who is, by any common sense definition, the epitome of a responsible member of the community and the absolute antithesis of a criminal.  His only crime was that he chose to follow the wrong set of conflicting laws and not a single member of the entire federal justice system had the courage or integrity to stand up and say “stop” to this vindictive little shit of a sheriff and his equally self-important buddies in the DEA.  About the only bright spot in the case was that the Judge, with no help from the Obama Justice Department, doled out the lightest prison sentence he could justify under federal mandatory sentencing requirements.

What is most disturbing about the Lynch prosecution is how clearly it illustrates the point that the federal government is willing to act completely contrary to the welfare and wishes of the population in pursuit of its own self-serving interests.   The only beneficiaries of the crusade against Lynch were members of the machine of state and most of that gain simply served to enlarge their already swollen egos.

I recommend the movie because it angers us and helps remind us that there are a lot of real casualties in the war against the drug warriors.  It’s the Charlie Lynches of the world who do the most to convince the public that the drug war is destructive and ineffective.  But it’s also the Charlie Lynches of the world who make up the wake of death and destruction left in the path of organizations like the DEA.  When it’s finally all over and the drug war is just painful memory, I wonder if we’ll ever see a monument to the fallen heroes who had the balls to challenge the mindless government automatons whose job it is to destroy other people’s lives in exchange for a weekly paycheck.

Of course, I’m sure the folks at the DEA easily manage to rationalize what they do.  Destroying people to save them probably makes perfect sense to them.

L’Anse Creuse High School in Harrison Township, MI, was shut down today when a man dressed in camouflage was was spotted at the school.  It turned out that the man was a former student who worked at a nearby Air National Guard base.  He was there to try and get a recommendation.

In response, the school was closed for the day and sheriff’s deputies were called in to investigate and check the building.  Students being bussed to school were diverted to a safe location away from anyone dressed in scary camouflage.  For good measure they also closed L’Anse Creuse Elementary and Middle schools.

In typical bureaucratic style, school spokeswoman Kelly Allen says “We still believe that the right decision was made by making sure our students were safe…”

I think this is exactly why today’s heavily militarized police wear Gestapo black instead of the more war-like camouflage.